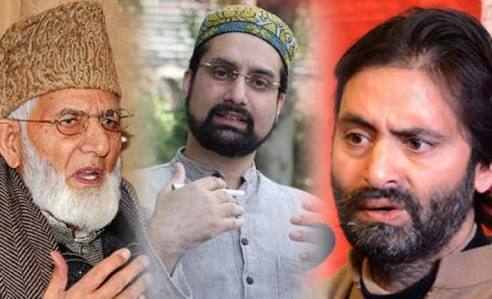 Joint Resistance Leadership comprising Syed Ali Geelani, Mirwaiz Umar Farooq and Mohammad Yasin Malik expressed deep anguish and grief at the killing of son of the house owner young Rayees Ahmed and two armed youth Mehraj ud Din Bangroo and Faid Mushtaq Waza in Fateh Kadal today morning by the Indian forces, razing down of the house and damaging others around it and the cardiac arrest suffered by the owner of the house due to the forces action.

JRL said that state repression against people is increasing with each passing day as it gets manifest in different forms of atrocities being committed. State machinery is all out to crush people in order to crush their dissent. Communication lines are blocked as internet is suspended frequently. youth and activists are arbitrarily booked under draconian PSA and sent to outside jails. There is no law in the land except the law of state might. Universities and colleges are forcibly closed to disallow students from raising their voice against daily killings and atrocities. Kashmiri Students in outside universities are booked in false cases and harassed. Even news reporters and photographers are not spared and thrashed!

Election dramas are foisted upon us through force while our very existence as a people is legally threatened in Indian Supreme Court. JRL said Kashmir has become a classic case of occupation. No voice of humanity and justice is heard in India today that speaks up for what the people of Kashmir are being subject to by their rulers in the so called democratic country.

In all this leadership and activists are illegally and forcibly detained either in jails or kept under house arrest by the state and not allowed to reach out to people. No peaceful expression of protest by leadership or people against these atrocities and anti-human measures is allowed. All space to peacefully and democratically resist this oppression has been completely chocked. Protest shut downs are only means left to us to resist the state onslaught and show our resilience to it.

JRL said that people will observe a protest shutdown tomorrow 18 October against the atrocities being inflicted on people including gruesome killings, arbitrary arrests and PSAs, destruction of homes, harassment of students attack on journalists and all other measures of repression.

COOKING OIL: LESSER, THE BETTER HERE IS WHY?

2 Sons Arrested For Murdering Their Father

Cop Shot Dead In Pulwama, Second Killing In Kashmir In 24...

COOKING OIL: LESSER, THE BETTER HERE IS WHY?

2 Sons Arrested For Murdering Their Father