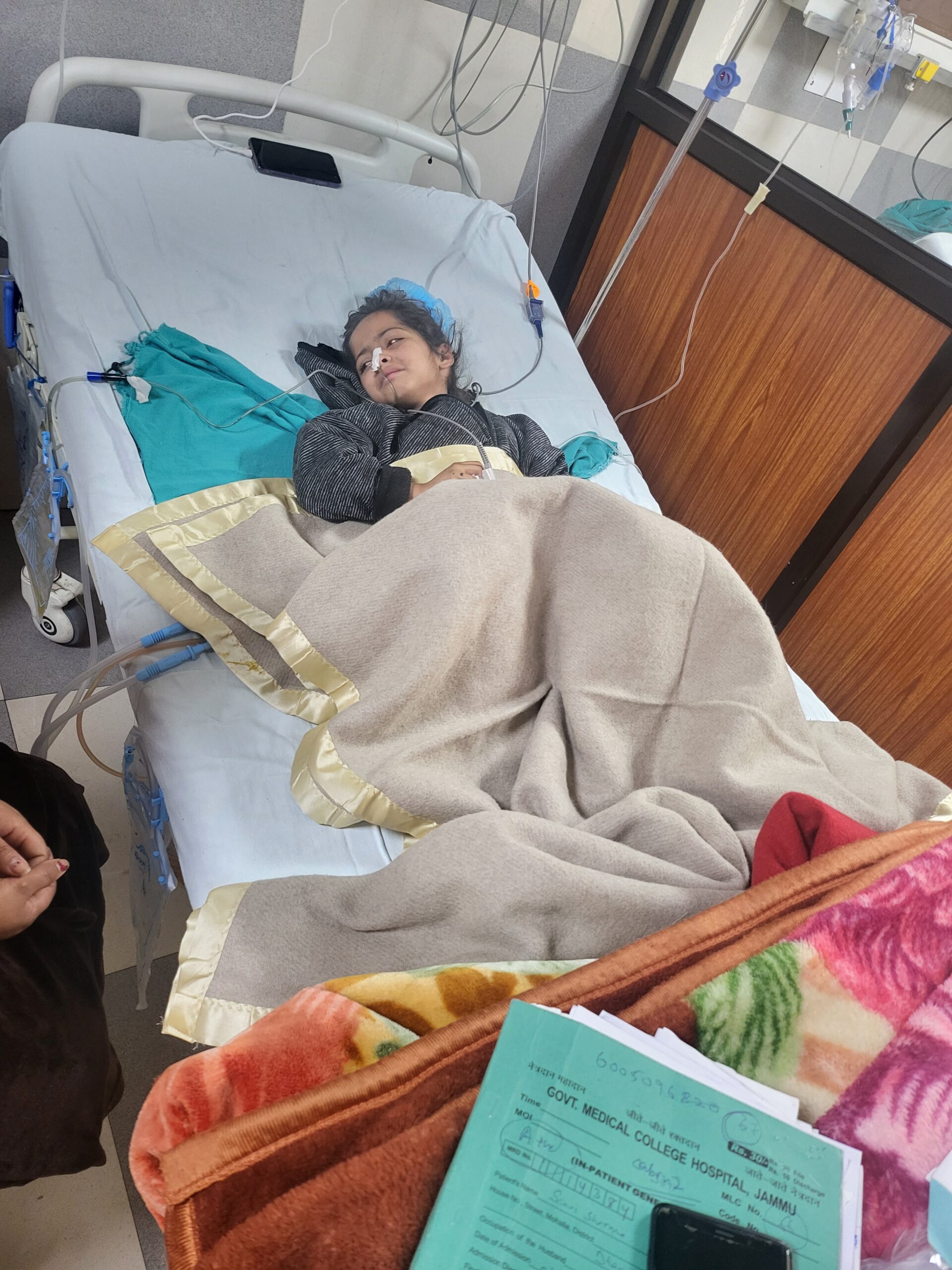 On the first day of the new year, 2023, the terrorists carried out twin attacks in Dangri Village of Rajouri District, killing seven people, including two children and two siblings of the same family.

Crying with pain and murmuring in the ears of her mother, Sanvi Sharma asks her mother for a sip of water. Sanvi, who is just six old from Dangri village in Rajouri district, was critically injured in an IED blast planted by terrorists inside their home. Sanvi lost her brother Bihan Sharma who was just four years old and died on the spot in the explosion. The tale doesn’t stop here. Many other families in the same village lost their dear ones in the targeted killing by terrorists on the first day of December 2022. So far, seven people have lost their lives, and the recent one was Prince Sharma, who succumbed to his injuries on December 8. Dangri Terror Attack: First Deadliest Attack in 2023

Prinkle Sharma, the mother of Sanvi and Bihan, is shattered by this horrible incident. Prinkle, on that fateful day, was in preparation for dinner when the terrorists struck the village. “Everything was normal, and as a routine, I was in preparation to cook the dinner for the family when I heard the shots of bullets,” said Prinkle Sharma. “We could understand what was happening. It seemed well-planned, and the terrorists were killing people brutally,” she added.

Another victim, Rohit Sharma, one of the critically injured persons, was at Deepu’s house. Deepu was his cousin, and Rohit had gone there with some milk. “I went to my cousin’s home with some milk, then I stopped there for some more time and was waiting for Deepu, who was out of his home for some work,” said Rohit. “I got shocked when Deepu was killed by terrorists right outside his car. After that, they came to us and pumped three bullets in my arm and abdomen,” added Rohit, who is undergoing treatment at Government Medical College, Jammu. Rohit could not narrate the whole incident. “I don’t know what further happened at our village. I got unconscious due to bullets,” Rohit added.

Another victim Shejal who has sustained injuries, lost her sister Samiksha in the IED blast. She and other children were roaming around the house, and suddenly a blast took place in which Bihan and Samiksha died on the spot, and Shejal and Sanvi sustained critical injuries. “People are saying terrorists had planted the IED under a bucket, but we didn’t see any such thing,” recalled Shejal. “I do not understand what our fault was. Why have we been targeted and killed,” asked Shejal.

Whatever happened was a dreadful tale on the 1st day of the new year 2023. This is the day when everyone wishes to start a new day with good wishes, and the people of Dangri village might have planned the same. But destiny had something else in the store, and the terrorists ruined their lives which time may not fill.

Four civilians were killed after gunmen barged into the houses of a particular community in Jammu and Kashmir’s Rajouri on Sunday, December 1st. According to the reports, two terrorists were involved in the attack. The incident took place at nearly 7 pm when the two militants made their way through the forests and barged into three houses of the Hindu community.

Some people say that the terrorists had first confirmed the identity of the victims through their Aadhaar cards, but as per the eyewitnesses, the terrorists had come up with a foolproof plan and killed four people. The two other children were killed on next day in an IED blast planted by the same terrorists inside a house.

The incident was the first such attack in the past many years in the otherwise peaceful Jammu region and coincided with the first day of the New Year.

While commenting on the incident, the officials said, “The firing ended within 10 minutes. First, they attacked a house in Upper Dangri, and then they moved 25 meters away and shot several people there. They also fired on another house 25 meters away from the second house while fleeing the village.”

He said bullets hit a total of 10 people and three of them were declared brought dead at the Government Medical College hospital, Rajouri.

Another critically injured civilian succumbed while he was airlifted to Jammu, along with two other injured persons.

The death toll in the terrorist attacks in Dangri village of Jammu and Kashmir’s Rajouri has risen to seven, with one more civilian succumbing to injuries at a hospital in Jammu on Sunday, December 8.

Prince Sharma, who was in his early 20s, died at the Government Medical College (GMC) Hospital Jammu, where he was shifted for specialised treatment along with several others after getting critically injured in the firing by terrorists in Dangri on January 1.

The attack on Dangri had left six people, including Sharma’s elder brother Deepak Kumar, dead. While four persons were killed and six others injured in the terrorist firing on January 1, two cousins were killed, and nine others were wounded in a powerful Improvised Explosive Device (IED) blast in the village the following day. The IED was planted by terrorists before fleeing.

Soon after the incident, the Lieutenant Governor of Union Territory of J&K, while expressing his sympathies with the victim families of Dangri, Rajouri said that those behind the terror attack in Jammu and Kashmir’s Dangri village will not go unpunished. “I strongly condemn the cowardly terror attack in Rajouri, and I assure the people that those behind this despicable attack will not go unpunished. My thoughts and prayers are with the bereaved families,” Sinha said in a tweet.

The lieutenant governor announced that ex-gratia of Rs 10 lakh and a government job would be given to the next of kin of each of those civilians “martyred in the dastardly attack.” He said that the seriously injured would be given Rs 1 lakh.

Besides, LG Manoj Sinha directed all the top officials to take off the injured persons and directed a massive manhunt to trace the terrorists involved in the attack.

Taking cognizance of the incident, the Home Ministry issued an order to deploy an additional 18 companies to Jammu and Kashmir in the wake of recent killings of civilians in two fresh terror attacks in the Rajouri district.

The move followed a recent order issued by the Ministry of Home Affairs amidst intelligence input about the terror attack in the Jammu region, said the source.

ADGP Mukesh Singh cautioned people as another suspected IED was spotted in the area near Upper Dangri village, which is about eight kilometers from Rajouri town.

The authorities have re-activated the village defence committee (VDCs) by providing members with new ammunition of .303 rifles to strengthen the self-defense set up in the border district.

The development comes in the aftermath of twin terror attacks in Rajouri’s Dangri village on December 1 and 2, in which seven people lost their lives.

A special camp for VDC members of the Dhangri village in Rajouri was held by police lately wherein members of defence committees were provided with new ammunition of .303 rifles which were cleaned and repaired.

There has been a demand by villagers of the Rajouri district for strengthening of these committees, with people asking for the provision of new weapons to people besides proper maintenance and repair of existing ones.

There are more than six dozen VDC members in Dhangri village, where terrorists carried out a deadly attack.

VDC members of the village demonstrated proper use of weapons to the committee members. The working condition of these weapons was also checked. Police also issued new ammunition to these members. They were also taught weapon-cleaning practices.

Former Jammu & Kashmir Chief Minister Farooq Abdullah said terrorists do not discriminate between their victims, whether they are Hindus or Muslims. “I condemn the killing of innocent persons. It does not matter what religion or region the victim belongs to, an innocent is an innocent.”

Omar Abdullah, the National Conference Vice President, in a tweet, said. “Deeply shocked as more details emerge of this targeted attack in Rajouri district of Jammu. I unequivocally condemn this heinous attack & send my condolences to the families of the deceased” “I hope those injured in this attack will make a swift & complete recovery,”

PDP president Mehbooba Mufti too condemned the killings and said in a tweet.

“Condemn this cowardly act & condolences to their families. Despite being under BJP rule & its bogus claims of ending militancy, violence continues unabated. Had J&K had its own elected government, the same media would have hauled them over the coals,” she tweeted.

People’s Conference leader Sajad Lone in a tweet, said: “Yet another carnage. This time in Rajouri. Condemn the cowardly act. My thoughts are with the families of those who lost their lives.” “The perpetrators of this dastardly act will rot in hell,”.

Altaf Bukhari-led Apni Party called it a “cowardly and dastardly attack.” “Such heinous acts are condemned in the strongest possible terms. We stand in solidarity with the civilians and pray for peace to the deceased and strength to the bereaved,” the party tweeted.